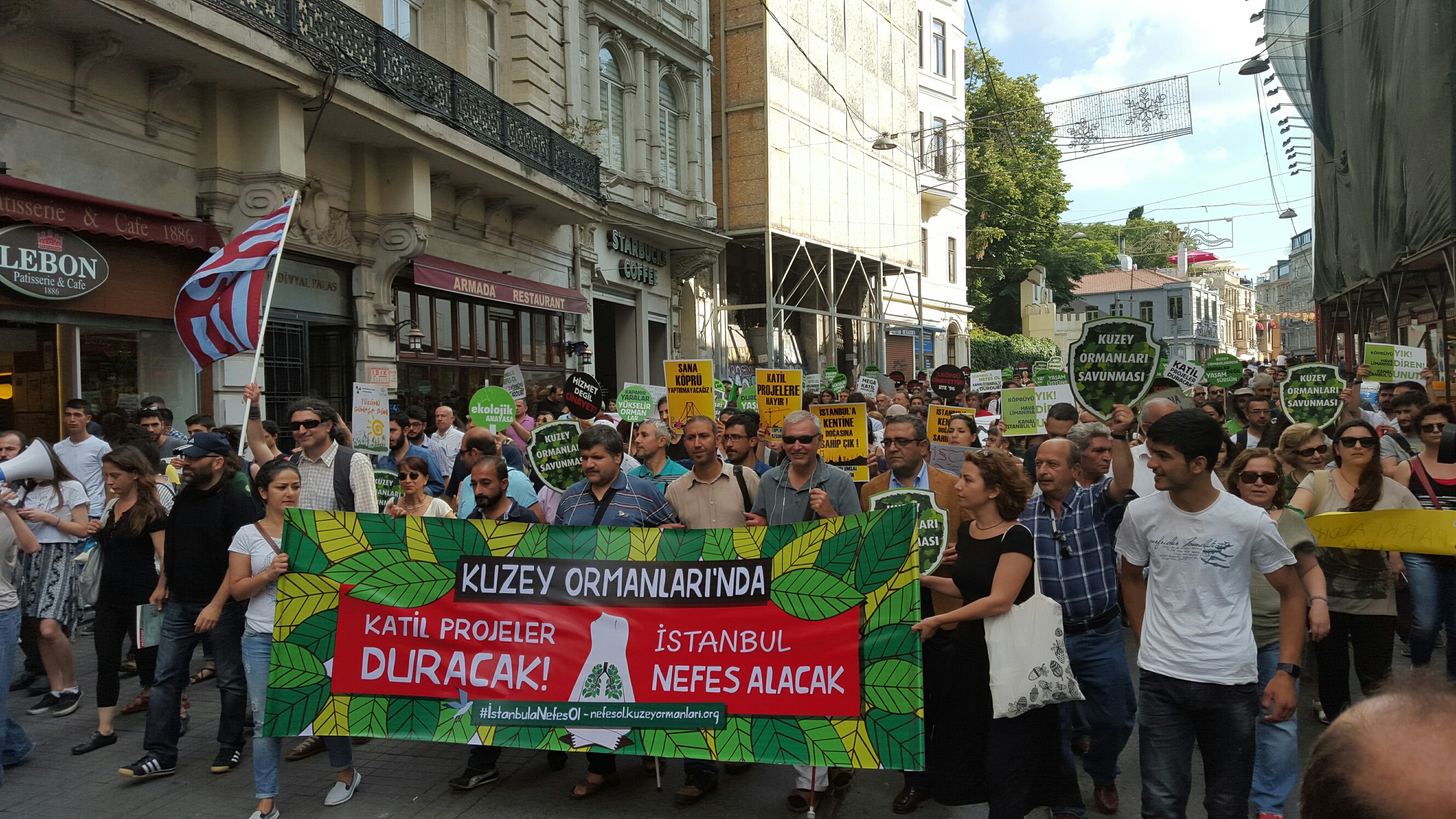 In March, Kuzey Ormanları Savunması​ (the ‘North Forest Defence’) which campaigns to protect the forests to the north of Istanbul from industrialization and urbanization, published a 100 page comprehensive report into Istanbul’s third airport, currently under construction. Entitled The Third Airport Project: Vis-a-Vis Life, Nature, Environment, People and Law, this report has been translated into English. It exposes the ecological destruction of the project, and examines the drive for economic growth and corporate profits that is the real reason it is being so relentlessly pursued by the government and firms that stand to benefit.

The site is gigantic, over 76 square kilometres. About 80 per cent of this area is forested, the remainder consists of 70 large and small lakes, meadows, farmland and coastline. All are being destroyed as airport construction progresses.

The reason for the gigantic site is that the plan is not for an airport. Land is being expropriated for an ‘aerotropolis’, an airport surrounded by commercial development that is designed to be aviation dependent and support growth of the airport.

Istanbul’s last large area of green space is being sacrificed for a vast urbanisation incorporating the world’s biggest duty-free shopping centre, hotels, a convention centre, sports centre, business space, a clinic and other facilities. Ostensibly, the land is allocated for an airport with the incredibly ambitious goal of handling 90 million passengers annually, ultimately becoming the world’s busiest airport with 150 million passengers passing through.

But even if the airport does indeed grow to handle this number of passengers, an eventuality regarded as unlikely within the aviation industry as well as by its critics, there will be plenty of space for commercial activity. North Forest Defence estimates the area surplus to requirements for aeronautical activities at 57 square kilometres. This is illustrated by comparison with the world’s busiest passenger airport, Atlanta in the USA, which, with a a far smaller land area of 1,625 hectares, handles about 95 million passengers per year.

Preparation of the site for construction commenced on approval of an Environmental Impact Analysis (EIA) that North Forest Defence’s work exposes as utterly inadequate, full of serious omissions and trivialising the impacts of the project. Lakes are described as ‘ponds’, the number of species at risk is under-reported and the bizarre claim is made that, of the 2.5 million trees earmarked for felling, over 1.8 million would be moved to another place, a mass replanting that is technically impossible. The reality is that the habitat of animal and plant species is being obliterated. Endangered bird species whose habitat is imperilled include the greater spotted eagle and the pygmy cormorant. Istanbul’s northern forests are one of the world’s major bird migration routes with hundreds of thousands flying over every spring and autumn. This means that the airport will endanger human life as well as birds, as there will be a considerably higher flight safety risk from bird strikes – collisions between birds and aircraft that can cause fatal air accidents.

Istanbul’s third airport has proceeded in the face of vigorous opposition from a broad coalition of environmental, community and civil organisations, plus professional associations of engineers, architects, scientists and economists. There have been endless campaign meetings and protests, in the centre of Istanbul and in villages affected by the project. The two photos below are of the protest to mark the groundbreaking ceremony for the airport, on 7th June 2014. A slideshow with more photos of this lively protest can be viewed here.

North Forest Defence’s report is also a powerful critique of the financing of the airport, and the economic implications. The tender to construct the airport and operate it for 25 years, the biggest in the history of Turkey, was awarded to a consortium of five firms, all with close ties to the government. These firms stand to profit from operating the airport, regardless of the actual level of traffic, because of a state guarantee of liabilities that may be incurred. The consortium’s economic benefit from the airport is also assured because of revenue guarantee of €6.3 billion over 12 years, from a fee levied on the projected 342 million international passengers over this period. There is a precedent for state payment to airport operators when the projected number of passengers fail to materialise; €27 million has been paid to reimburse the operator of three of Turkeys’ airports to compensate for a shortfall. Treasury guarantees mean that the economic risks of the project fall onto citizens.

Every Turkish citizen will incur debt due to the cost of the project, which has already escalated from $16 billion to $20 billion. The airport project is part of a construction and real estate speculation frenzy that serves as Turkey’s main economic stimulus, keeping up a flow of ‘hot money’ – international capital seeking short term profits from interest rate differences and anticipated shifts in currency exchange rates – that buoys up capital markets and keeps the plates spinning.

The campaign to stop construction of Istanbul’s third airport is bolstered by an extraordinary visual record of the ecological destruction that is underway – photographs and videos. It is highly unusual for a megaproject to be documented in this way and it is extremely effective in raising the alarm over the scale and severity of the ecocide that is happening. The site is crawling with hundreds of trucks excavating and dumping earth, the level of infill required to raise and level the site is estimated at 2.5 billion square metres, and compacting the soil is on the swampy site is proving problematic.

Trucks in the Istanbul third airport excavation area, the number of trucks in the project area is expected escalate from 1,200 to 2,000

A video shows destruction of forests and meadows and filled in lakes, swathes of bare earth being worked by bulldozers, and piles of felled trees. There is nowhere left for the wild animals or for farmers to tend their sheep.

Video of storks, one of the 300 species of birds whose habitat is being destroyed for Istanbul’s third airport, flying around bewildered and traumatised in the immediate aftermath of their habitat being bulldozed.

This video, published in May 2015, shows the impact of airport construction on the coastal village of Yenikoy. It begins with a farmer explaining the ‘airport city’ plans, shows the farmland that is at risk as bulldozers move ever closer, then reveals the destruction of forest, lakes, farmland and coastline that is already underway.

Istanbul’s third airport is integrated with other ecologically destructive megaprojects – a multi-lane third bridge over the Bosphorus Strait and a canal running alongside it. Highways to provide surface access mean the loss of yet more green space. All these projects open up the virgin forests for further plunder and feed each others growth. Campaigners have stepped up their efforts to tackle these megaprojects as a package. North Forest Defence has joined forces with Istanbul Kent Suvanmasi (Istanbul City Defence) and on 5th July 2015 a new campaign was launched. The slogan is: ‘Stop the Killer Projects! Be the Breath of Istanbul‘. The forests north of Istanbul are depicted as the lungs of the city, providing oxygen for people and all life to breathe. As well as resisting the megaprojects the campaign is about envisioning and creating a future city which lives in harmony with nature rather than destroying it, taking forward the optimism that concludes North Forest Defence’s report into the third airport, the conviction that ‘it is in our hands to write another story’.

A banner is unfurled from the top of a building, it reads: ‘Stop the killer mega projects, defend 250 million trees, be the breath of Istanbul’: Photo: North Forest Defence

“Stop the Killer Projects! Be the Breath Of Istanbul!” campaign ribbon, slogan translates as ‘Be the Breath’. Photo: North Forest Defence 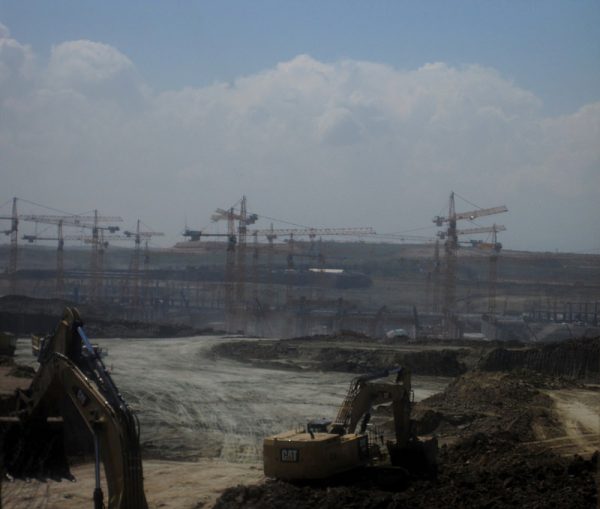 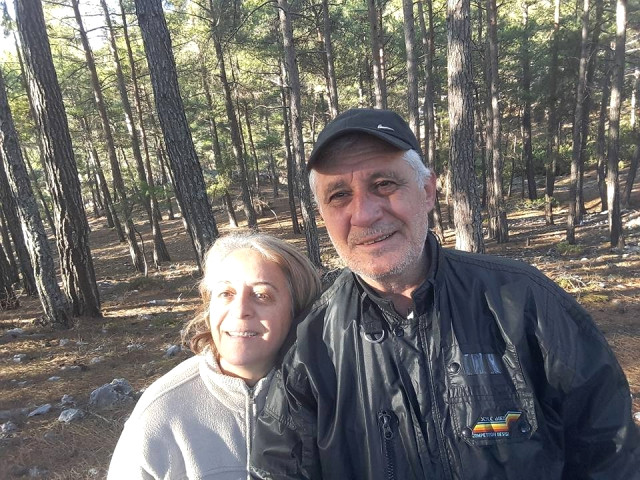 We are in mourning 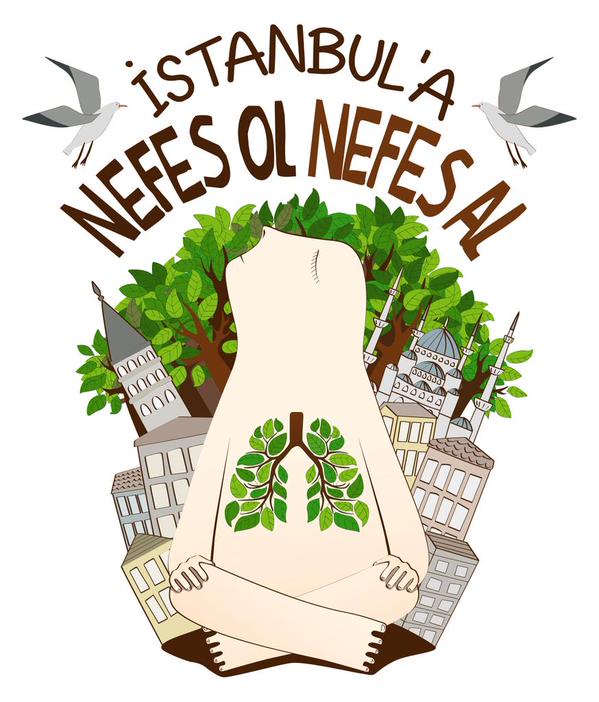